Cambridge Wind Band (CWB) was founded by Viv Halton and Sarah Hughes in January 2012, to provide quality music-making for wind, brass and percussionists in the Cambridge area. The fifty-piece band enjoys playing a wide range of music, including classics from the wind orchestra repertoire, transcripts of film and TV themes, arrangements of popular music, and specially-commissioned pieces.

CWB performs at least four concerts a year in Cambridge. Alongside these formal concerts, CWB has performed in summer concerts at Wandlebury Country Park (2014), Girton Feast (2016 and 2018), and Windsor Castle (2017 and 2018).

In recent years, CWB has played at Addenbrooke’s Hospital in Cambridge to entertain the crowds as 320 bikers, dressed as Santa, delivered Christmas presents to unwell children. CWB is very much looking forward to be involved in this incredible event in December 2018! 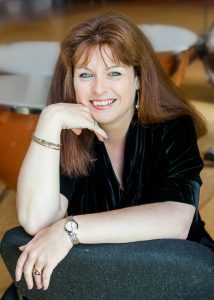 Viv was born in Ealing, west London and was educated at Notting Hill & Ealing High School and the Junior department of the Guildhall School of Music and Drama. Whilst at school she played bass clarinet in the National Youth Wind Orchestra where her first experiences of Wind Orchestra repertoire began. Having gained a music degree from Anglia Ruskin University in 1991, she now teaches the clarinet and saxophone full-time at The Perse Upper School, where she is the Head of Wind and the Director of Wind Bands. Viv is a member of the clarinet and saxophone society of Great Britain (CASS) and was delighted to be asked to start writing reviews of newly published music and technical reviews of instruments for their magazine. As well as conducting CWB, Viv has conducted the Hertfordshire concert band at Windsor Castle. Viv regularly plays the clarinet and bass clarinet in the Sampson Orchestra of Cambridge and the City of Cambridge Symphony Orchestra. She recently performed in the Cambridge premiere of Robin Holloway’s ‘Serenade’ with the newly formed Cantabrigian Wind Octet. As a saxophonist she has recorded for the BBC and for Jazz FM. She very much enjoys playing jazz with the Halton Trio and with the other three members of the saxophone and clarinet quartet ‘Simply Reeds’. Viv is married to fellow musician Jon Halton and has a son, Mikey.